Echocardiography without Doppler? The problem of subaortic stenosis

in Cardiology, Developing your skills

There is a lot of debate within cardiology over what the definition of an echocardiogram should be. This has been fueled by the recent miniaturisation of ultrasound technology, its greater affordability, and the associated attempts to get ultrasound into the hands and pockets of those on the ‘front line.’ This has been most marked in the realm of human cardiology, but increasingly so within the veterinary world as wellm with many emergency vets and anaesthetists opting for handheld machines.

The use of ultrasound as an additional diagnostic tool is to be encouraged, but at what point does a cardiac ultrasound screen become an echocardiogram – and is this question important? Is an echo defined by the capabilities of the equipment used, the qualifications of the operator, the extent of the protocol, or all three? For example, if a focused study is performed by a qualified echocardiographer or veterinary cardiologist, has an echo been performed? If the same protocol is followed by someone trained only to perform this limited set of images to rule out a handful of pathologies, is it now somehow less of an echocardiogram?

Such debate may seem unnecessarily pedantic, but a case I saw today made me reconsider the question.

Molly is a 2 year old boxer who was diagnosed with a grade 3 heart murmur whilst on holiday with her owners in Portugal. She went for an echocardiogram which was reported as normal, free from any abnormalities. However, she continues to exhibit symptoms (stopping during exercise and coughing), and her murmur remains unexplained.

She was scanned today on a full service echo machine, and on 2D imaging alone, her heart does indeed look normal. A full echocardiogram, however, involves the use of Doppler. We first checked Molly’s valves with colour Doppler. Her diagnosis didn’t indicate whether the murmur was systolic or diastolic, so one theory was that she might be suffering from some degree of mitral regurgitation.

We checked all of the valves. Molly did have some mitral regurgitation, but this was clearly mild at most, so the next step was to interrogate the valves with spectral Doppler, and that was where it got interesting.

With a peak velocity through the aortic valve of over 5m/s (over 100 mmHg), Molly’s valve gradient was clearly abnormal. 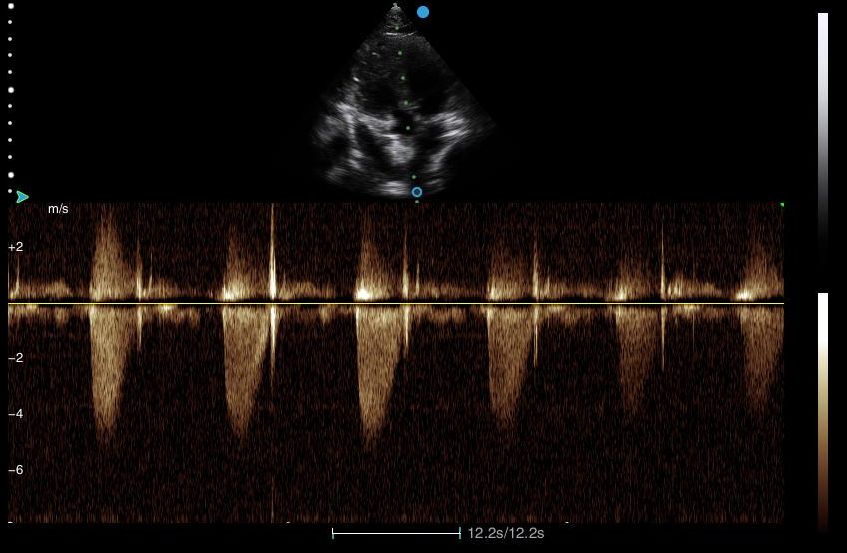 A full Doppler study of all valves may not be practical for many veterinary practices, but a simple Continuous Wave trace through the aortic and tricuspid valves (for estimating pulmonary pressures) should be considered a minimum data set for any ultrasound study labelled and billed as an echocardiogram. Molly’s case highlights why this is so important. Sub-aortic stenosis is a well documented congenital heart defect in boxers, and this, combined with Molly’s symptoms and likely a harsh systolic murmur on auscultation, should raise suspicion in spite of a visually normal valve.

Continuous Wave Doppler was sufficient to indicate some degree of aortic stenosis in Molly, and the majority of veterinarians would be entitled to end the study at that point and refer their patient to a cardiologist. For anyone wanting to take their examination a little further, there is the option of using Pulsed Wave Doppler to pinpoint the location of the lesion (since CW Doppler has no range resolution).

You can do this by placing your Pulsed Wave just inside the left ventricular outflow tract (LVOT), and advancing it closer and closer to the valve. In Molly’s case, we found that at the very start of the left ventricular outflow tract (LVOT), her peak velocity was 0.8m/s, but went off the scale (aliasing due to high velocity blood flow) as we approached it, confirming that the stenosis was indeed right before the valve itself.

Ultrasound is an invaluable diagnostic tool, and its use should be encouraged. However, there should be discussion and clear guidelines/protocols set within practices regarding what constitutes an echocardiogram. This eliminates the danger of a false negative study. If Molly’s scan had been documented as a cardiac screen only (such as a ‘FAST’ scan), its findings would be entirely accurate and, in light of the dog’s heart murmur and with sound advice, the owner would have known to follow up with a full quantitative echocardiogram from a specialist.

Final note: The above points are opinion only and do not constitute a veterinary diagnosis. Molly’s owners have been advised to see their veterinarian, and provided details of a cardiologist they may wish to request referral to. Her story has been shared with permission.

Snake and reptile scanning with ultrasound

What is suicide right ventricle?